The present restoration project makes available as high resolution downloads the complete 42 recordings of «Edgardo Donato y sus Muchachos» made at the RCA Victor record label in Buenos Aires between 1940 and 1945. The work was done in our new transfer studio in Dinant, exclusively from original shellac records from our own collection.
Most of Donato’s studio recordings of the 1940s were produced during the years 1940 and 1941. His singers in those years were Horacio Lagos, Lita Morales and Romeo Gavioli, who joined the duo in late 1939. The first two years show a very steady recording activity, accounting for 30 out of the total of 42 album titles in the 1940s. The production goes down to merely six titles in 1942. In 1943, there is no recording and in 1944 there are only two recordings. One year later, in 1945, two more records follow with four titles. After this, Donato resumes recording only in 1950 with the Pampa label.

The statistical breakdown of the present repertoire sums up as follows: There are 23 tangos of which only two instrumentals, eight valses (notably the rare recordings of Luna, Diablesa, La shunca and Mañana será la mía), four otros ritmos and seven milongas. Three of the titles have been used in movies. Edgardo Donato himself composed 14 of the titles. If we add the three titles composed by his brothers, a little less than half of the present titles let us dive into a complete Donato universe. This places Donato into a category of «composing orchestras».
While the typical sound of the orchestra is still alive in the beginning of the 1940s, it starts to change with the recordings of 1942. The tempo slows down and the mood is different, but we still hear the so particular accordion played by the young Osvaldo Bertolín which produces the characteristic sound of the orchestra with its musette solos. Throughout the 1930s, the band united the brothers Edgardo Donato (violin), Ascanio Donato (cello) and Osvaldo Donato (piano). It’s after the break in 1943 that one can hear on the present recordings a new orchestra with a new lead bandoneon. The former band forked into an Osvaldo and an Edgardo Donato orchestra. Osvaldo Donato took with him most of the «muchachos», especially the emblematic singer Horacio Lagos and was present in the dancing clubs and radio stations of Buenos Aires. The singer Romeo Gavioli returned to Montevideo, where he formed his own orchestra in 1943 and recorded shortly after with the newly created Uruguayan record company Sondor. Lita Morales later recorded as a soloist on RCA Victor. Osvaldo Bertolín stopped tango and started a jazz band. He was then known as «Washington Bertolín y su Sexteto de Jazz» and recorded on Odeon. The new orchestra of Edgardo Donato was still called «Edgardo Donato y sus Muchachos», even though most of the Muchachos were gone. It’s on the last RCA Victor record 60-0719 where the name changes to «Edgardo Donato y su Moderna Orquesta Típica». The singers of the mid-1940s were Jorge Denis, Daniel Adamo, Pablo Lozano, Alberto Podestá and Roberto Beltrán. Compared to the earlier recordings, the new recordings express a different, less joyful, more serious atmosphere. When the band moves in 1950 to the Pampa record label it is simply called «Edgardo Donato y su Orquesta Tipica». The 1944-1945 repertoire anticipates the new sound of the orchestra which will be typical of its 1950s works.

PITCH
We have analysed all recordings of the present album individually to determine the exact speed for our transfers that corresponds with the piano tuned to A4=440Hz. The pitch information is extremely important because it allows us to recover the original recording speed so you can enjoy these recordings in the intended tonality and tempo.
Most of the RCA Victor orchestras retuned to A4=440Hz at around 1939 with some early adopters like Osvaldo Fresedo (retuned in early 1934). Edgardo Donato retuned in early 1938. 1939 is also the year when one of the International Federation of the National Standardizing Associations (ISA) conferences took place in London establishing the new A4=440Hz concert pitch internationally. Conforming to this new standard pitch seems to be natural for RCA Victor as their headquarters were situated in the USA, where the 440Hz pitch was already widely used since the 1920s. For the present Edgardo Donato album, we have obtained very clear tuning information from our analysis and the correction process was straightforward with a few exceptions like some otros ritmos missing clear solo piano tones. The deviations were generally very small, often just some cents.

PHONO TECHNIQUE
For the production of this album, we used for the first time our studio in Dinant, where we have installed a dedicated shielded power line on fine-wire fuses for our transfer turntable which further reduced parasite sounds. We have also put into production a new, longer tone arm which better accommodates some of our heavier cartridges. Throughout the present album, we were able to use the same cartridge which gives more coherence to the sound of the album.

DISCOGRAPHY
As a starting point, we based ourselves on Boris Puga’s work «El tango en los años cuarenta, Discogafía» from 1972 and the Nicolas Lefcovic discography. In our coordinated discography we added fresh information directly from the original records like notes, matrix and take numbers. We did not include in the present album or in our discography the three titles which appear in some discographies directly after the RCA recordings because they do not seem to be studio recordings but rather radio transcripts on acetate plates: Sin palabras, Una vez and Demasiado tarde. Most likely, they were not published by RCA Victor as claimed. Also, they were probably not recorded in 1945. Given the repertoire and the sound quality, they rather seem to be recorded at some radio station in 1946 (a source on todotango.com points to this date too). Donato’s discography contains a few points of discord among the experts, especially with one instrumental version of El huracán and Para qué recorded presumably in 1952. Our discography starts with the first RCA Victor recording in 1932 and ends with his four last recordings in 1961. This leaves room for future extension albums once we have completed our collection especially with some missing records from the 1930s and 1950s. Please regard our attached Edgardo Donato discography as a work in progress. If you find any errors or improved information please let us know.

FORMATS
This edition is available in the formats: 24bit-96kHz FLAC, 16bit-44.1kHz CD quality both AIFF and FLAC and as 320kbps CBR MP3. This time we have not included any ALAC format because it was downloaded only once for our last album. We decided that it’s not worth the effort and the other formats are sufficient.

ACKNOWLEDGEMENTS
Age Akkerman, Amsterdam
For the discussions, crosschecks and help during our in-depth pitch analysis and corrections.
Omar Facelli, Montevideo
For his expertise in 78-rpm records and operating our mini transfer studio in Montevideo. 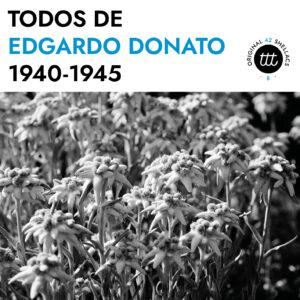