" A transfer of a recording can only be as good as the 78-rpm record at hand. For some tracks, we needed to try out up to six different specimens of the same record to find a good copy with a strong signal. "

A transfer of a recording can only be as good as the 78-rpm record at hand. For some tracks, we needed to try out up to six different specimens of the same record to find a good copy with a strong signal. Often, if the previous owner preferred one side of a record, it will show a variable amount of damages depending on the record player used and how much care the record received.

Typically, 78-rpm records were conceived for around 1000 playback cycles on a gramophone using up to 40g of tracking force. Modern record players use a much lower tracking force. Also, today’s improved stylus shapes are less harmful for the record grooves. Besides groove wall wear, there are a lot of other conditions encountered in the life of a record like damage caused by spilled fluids, changes of temperature, dust, impacts of sharp objects, all leaving traces on the record. Some are recoverable, and for other problems, it’s necessary to find a better copy of the record. For our restoration project we had to buy several collections of genuine 78-rpm tango records. When the records are in perfect mint condition, they can reveal a true master quality. In reality, they often have some problems which then represent an acceptable compromise as the fidelity of the signal compensates for the defects.

We believe that for best results, a lot of restoration effort has to be put into the analog domain in order to apply as little as possible digital filters which might alter the original signal. Therefore, we have developed a method which we would like to outline in the following description 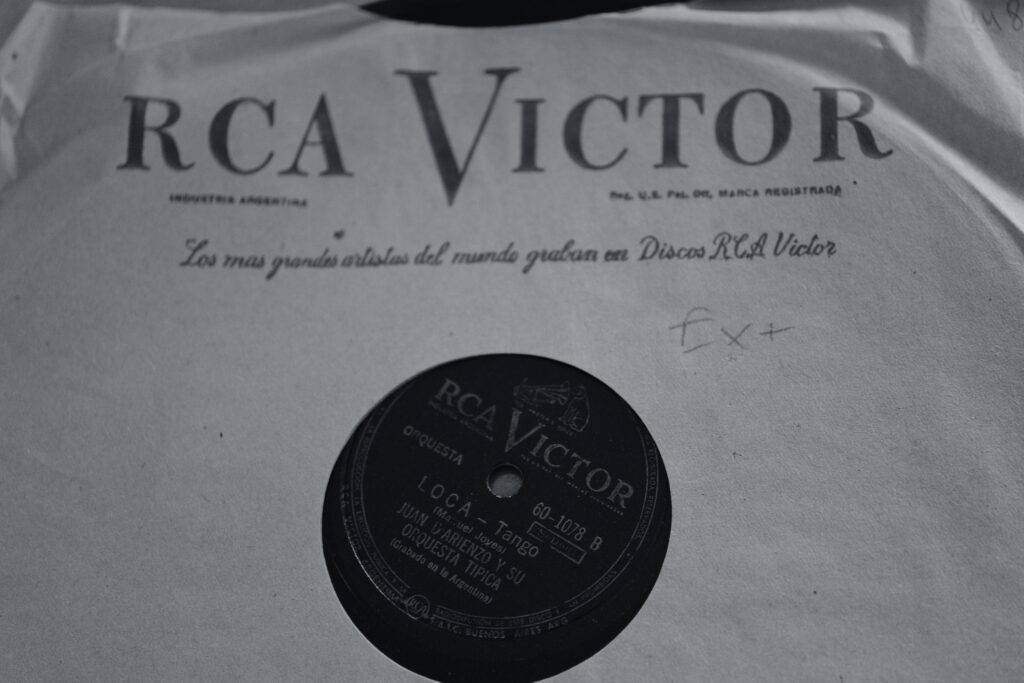 Once a record arrives in our studio, a first sorting according to date and orchestra takes place. When we start a restoration project of a particular orchestra and period, we order the records by record numbers. This has several advantages and once we start the restoration process we can follow the musical evolution, the recording technique and recognize eventual changes or conspicuous differences. 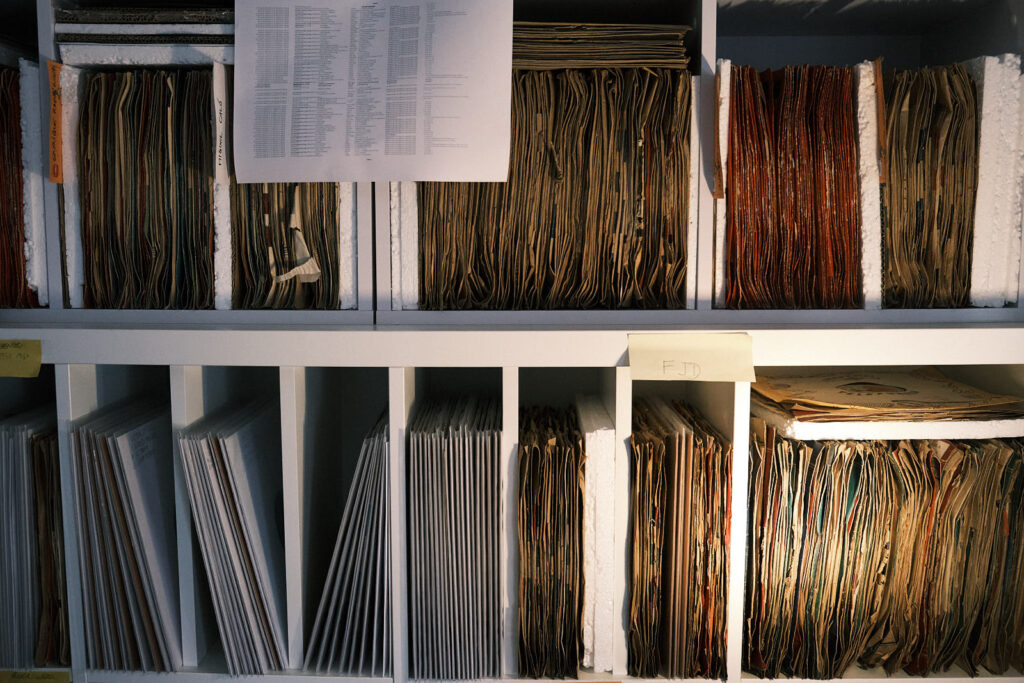 After a first visual inspection of the record, the record will be washed with a special record cleaning machine and detergent mixture, using a one point suction system to wash and dry. In our experience, this kind of design seems to be the most suited for cleaning 78-rpm records and far superior to other systems like ultrasonic machines. The inconvenience with the latter is that the dirt particles remain in constant contact with the record through the ultrasonic bath, also the vibrations might deepen cracks and other surface damages.

Some records need further processing like flattening through heat and pressure when they are warped. For others we need to re-sculpture some groove walls via a microscope when deep groove damage would prevent the continuity of the signal during playback.

Every record side will be photographed to constitute a digital photo archive. Special attention is given to the framing in order to capture the entire lead out groove and the label. This is because the lead out groove contains important information like the take number, the record and/or matrix number depending on the record label. 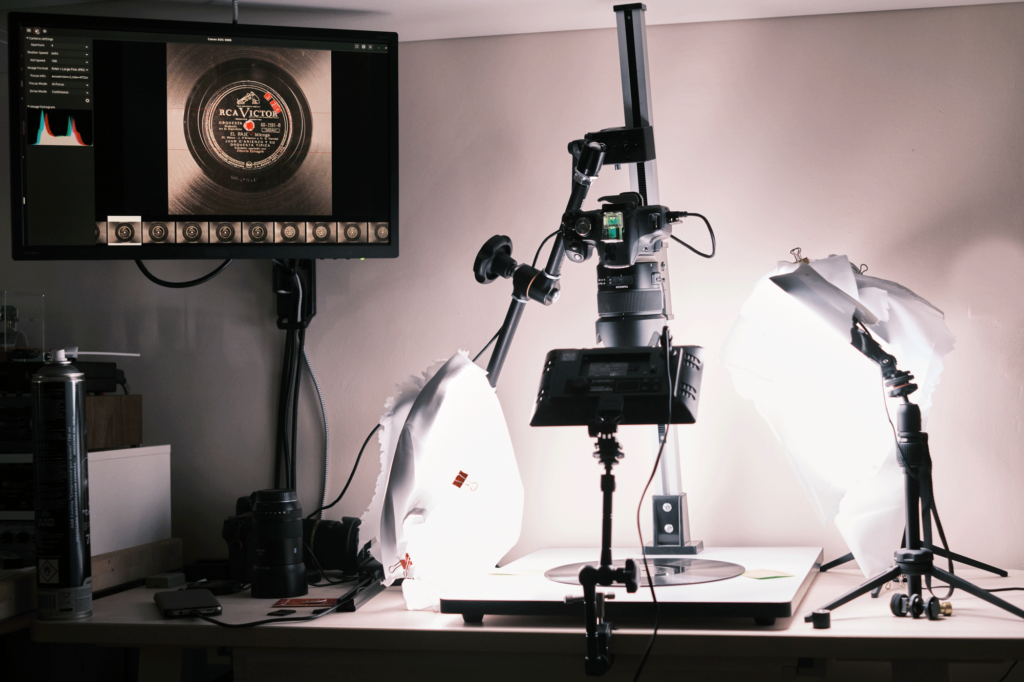 From the data contained on the record: label, record, matrix and take number, orchestra, title, interpret, composer, author, place of production and other information is carefully extracted and written into a discography. This database is crosschecked with different existing discographies and historic record catalogues which might provide further data like recording dates, etc. The resulting discographic document is shared together with our transfers with the community. 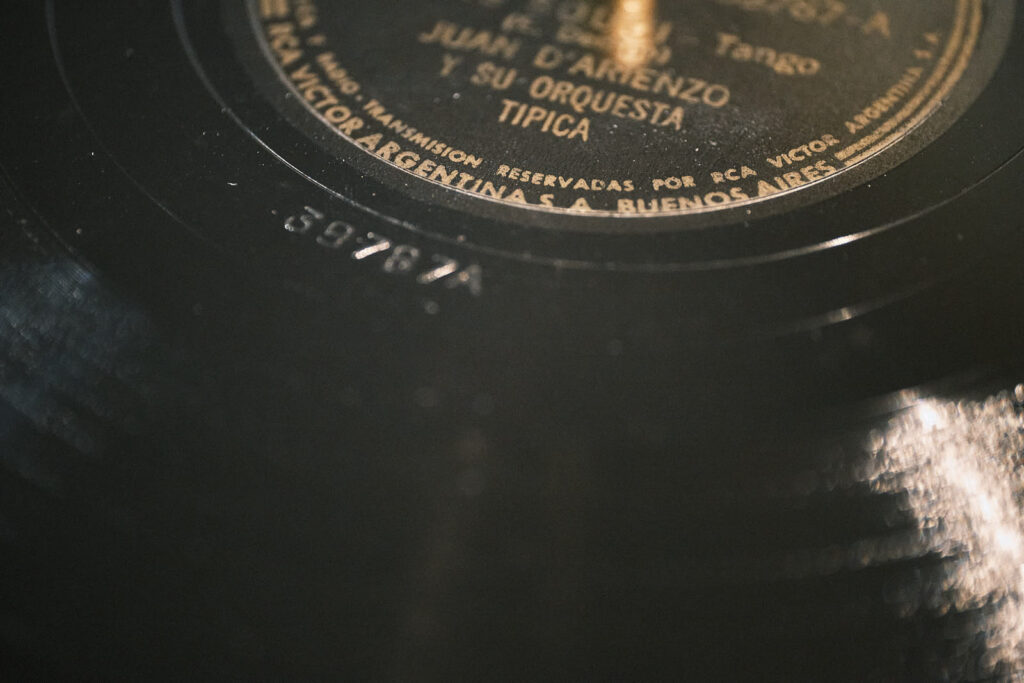 A digital working transfer, meaning a quick and rough recording, is made and offers a first evaluation of the general state of the record. In the early days, there were no precise and consistent playback speeds. Therefore, for all analog sound recordings, it is necessary to determine if there is a pitch deviation and, if necessary, to correct it. Sometimes, the record lathe (recorder) was running at slightly different speeds which can be explained for instance by fluctuations on the power grid. On later reissues, there might even be higher deviations due to the introduction of intermediate remaster steps like tape. Therefore it’s a good idea to transfer all records at a defined reference speed to analyze the pitch. We agreed on a speed setting of 77.92-rpm corresponding to the ideal speed in the 78-rpm system using 50Hz motors. And indeed most of the recordings appear to be in tune close to this setting. The deviation is then evaluated both by hearing and by a series of precise measures combined with statistical methods and calculations. Once the average deviation is determined in Hz, the corrected RPM speed of the record is calculated by an equation and applied on the record player. Hence, the correction takes place in the analog domain, and is not applied as a digital filter. The record is simply played back at the correct RPM speed while the transfer is being made.

The working transfer also permits to select an appropriate de-emphasis curve, as all record companies used a different scheme of pre-amplification prior to the RIAA standard which started to be generalized only by the end of the 1950s. The applied de-emphasis is verified through a set of near-field monitor speakers and a consecutive session in a dedicated listening room. The monitors and the listening room are regularly calibrated with room correction. In this phase, several cartridges with different characteristics and needle sizes are tested to find a match with the highest signal-to-noise ratio and the lowest distortion level. We found that not only the needle diameter but also the coiling and material of the cartridge determine a lot the resulting sound.

During this step, the gain is set to an optimum value on the phono pre-amplifier’s output stage. It is important to note that we use by preference solid-state amplification and no tubes. If you want to color your sound, you can use tubes later during playback. We believe that for neutral and accurate transfers a solid state amplification is best suited because it produces a signal which can be reproduced without variations if we have to go back and do the transfer again. 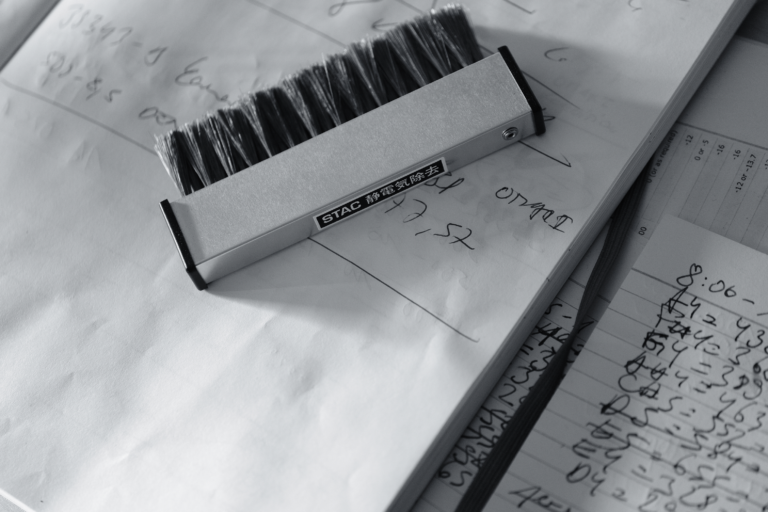 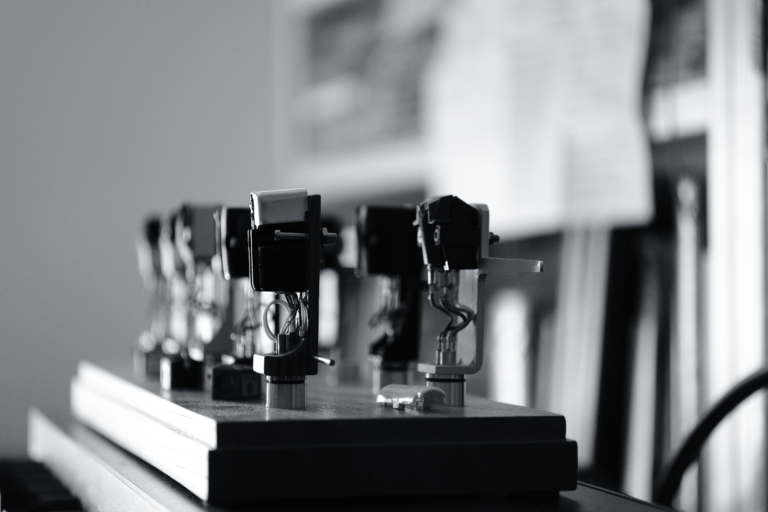 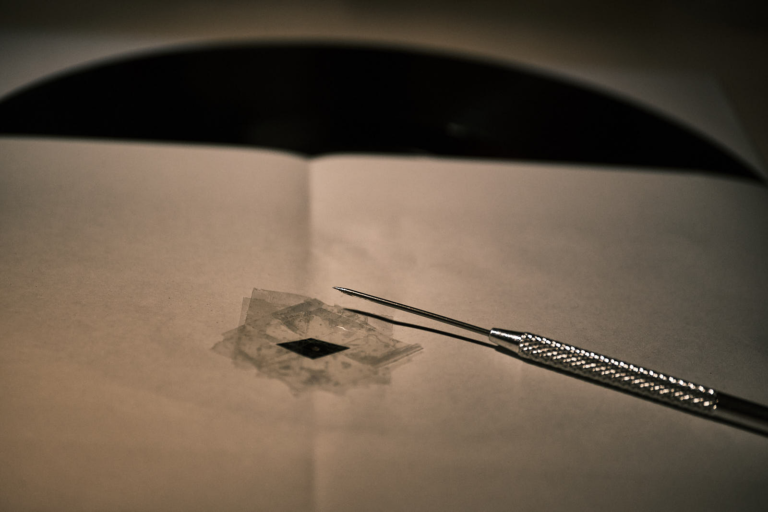 Once all the playback parameters are determined, RPM playback speed, cartridge, de-emphasis and gain, the transfer is made via a reference ADC (Analog to Digital Converter) at a very high sampling rate and word length. The corrected RPM is set on a digital device which controls the motor speed of the turntable platter and the historic de-emphasis and gain are all set on a physical analog phono pre-amplifier device.

If necessary, during this phase we center the record on the platter to correct for any off-centre spindle holes to effectively reduce wow and flutter and use the best cartridge producing subjectively the least background noise and richest sound. 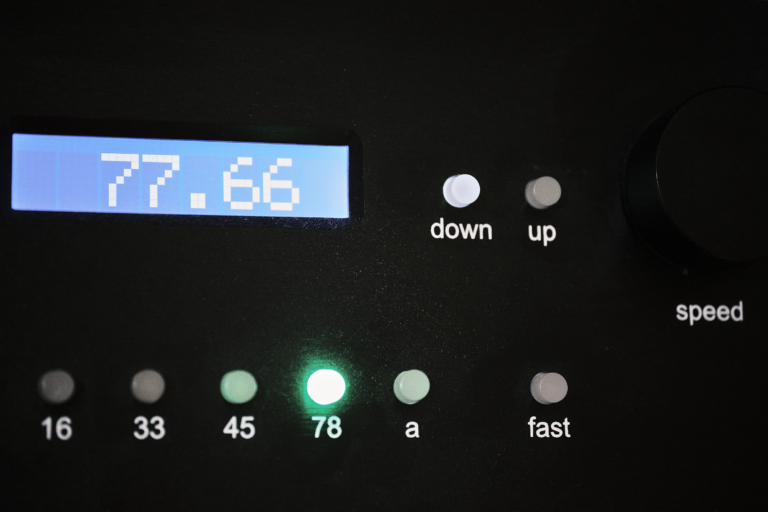 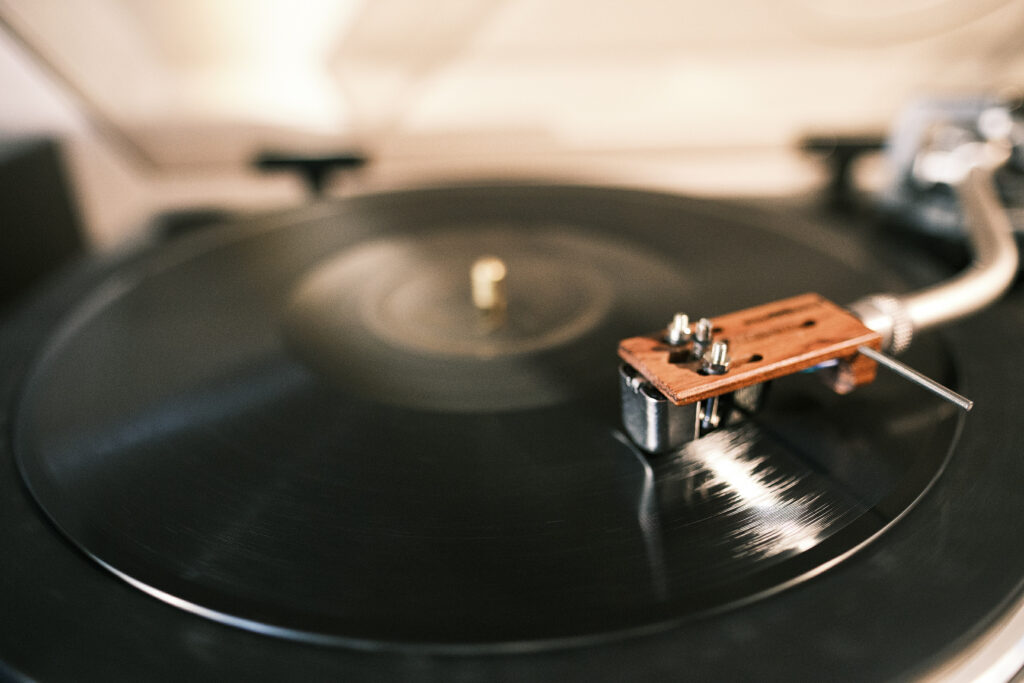 Digital processing is very carefully done and is generally limited to a gentle manual ‘declick’ and ‘dehum’ to avoid a too invasive action on the obtained signal and respect the original sound. There is also an equalization process to bring down any harsh frequency tones, especially in the bass regions (hum or rumble) or any other problematic parasite frequency. Finally this EQ session is also used to give a better overall sound balance (low-mid-treble) which might be obstructed by any earlier step or the wear state of the record.

" A last test is done in a typical milonga venue with an average PA system, with and without external playback DAC, to check the results in different circumstances. "

Once the result is agreeable to the ear, a peer review starts back in the listening room where all finished transfers pass again a hearing test among several listeners with a peak level at around 75-77dB SPL and proper room correction. If a transfer is judged not OK it goes back to the steps 1-7 according to the nature of the problem. A last test is done in a typical milonga venue with an average PA system, with and without external playback DAC, to check the results in different circumstances.

Metadata is filled in from the coordinated discography onto the resulting digital sound files and then the transfers are put online.