RELEASE NOTES TODOS DE PEDRO LAURENZ 1937-1968 The present restoration project makes available as high resolution downloads the complete 68 recordings of Pedro Laurenz and his orchestra made at the RCA Victor, Odeon and Pathé labels in Buenos Aires between 1937 and 1949. We also included all 12 vinyl titles from the LP record issued in 1968 by the Pedro Laurenz Quintet under the Microfon label.

RELEASE NOTES TODOS DE PEDRO LAURENZ 1937-1968
The present restoration project makes available as high resolution downloads the complete 68 recordings of Pedro Laurenz and his orchestra made at the RCA Victor, Odeon and Pathé labels in Buenos Aires between 1937 and 1949. We also included all 12 vinyl titles from the LP record issued in 1968 by the Pedro Laurenz Quintet under the Microfon label.

The transfer work was mainly done in Brussels but for some titles it was impossible to find any records and we were very lucky to get help from the famous collector and tango researcher Boris Puga from Montevideo who opened up his record collection for this project. With his contribution extremely rare and never republished titles of the Pedro Laurenz orquestra will finally be available in prestine quality: Quedate tranquilo, Poca suerte, Flores del alma, Todavía estás a tiempo and La gayola. Boris Puga also provided us with some better records where our own copies were not satisfying. The record collector Ruben Castaldi contributed A mí dejáme en mi barrio and Chatero de aquel entonces. All these sides were transferred in our mini studio in Montevideo. We believe that our new Pedro Laurenz album is a sensation in the sense that since the initial record production all titles are finally republished together for the first time ever!

DIFFERENCES RCA VICTOR – ODEON
The Pedro Laurenz típica started to record under the RCA Victor label in 1937 and changed to Odeon in the summer of 1943 during the recording sessions with the new singer Alberto Podestá. These two competing record companies sound very different. Generally spoken, the Odeon recordings immediately provide a very centered and comfortable soundstage. One feels to be in the middle of the orchestra while listening. Whereas the RCA Victor recordings establish a more distant position for the listener. We recognised that if we don’t pay special attention to the frequency balance this distant effect can become very strong and unpleasant. We are not completely sure whether this impression comes from record wear or if it’s a clear characteristic of the different recording techniques of the studios. A remarkable aspect is the lower distortion that we encountered on Odeon recordings. And indeed they advertised their records as to be very low in distortion. Maybe this had to do with the form of their grooves and the composition of their shellac material. While we often had to search for better, less distorted records with RCA Victor, the Odeon catalogue was transferred without any such time consuming issues!
In favour of RCA Victor we can say that their recording speed was much steadier than at Odeon where a lot of recordings show wow issues or pitch digressions during playback, most of the time falling progressively towards the end.

PITCH
We have analysed all recordings of the present album individually to determine the exact speed for our transfers that corresponds with the piano tuned to A=435Hz or later A=440Hz. Therefore the pitch information is extremely important for us and also for you so you can enjoy these recordings in the intended tonality and tempo.

Until now we mainly worked with RCA Victor records and most of their orchestras retuned at around 1939 with some early adopters like Osvaldo Fresedo (retuned in early 1934) or Edgardo Donato (early 1938). 1939 is also the year when one of the International Federation of the National Standardizing Associations (ISA) conferences took place in London establishing the new A=440Hz concert pitch internationally. Conforming to this new standard pitch seems to be natural with RCA Victor as their head quarters were situated in the USA where the 440Hz pitch was already widely used since the 1920s. For Pedro Laurenz, the first RCA Victor 440Hz recording is Vieja amiga recorded on 12.5.1938.

At Odeon things are quite different. To our big surprise the recordings of Pedro Laurenz, after moving to Odeon in 1943 are in the older pitch of 435Hz! And indeed, while checking as a reference the catalogue of Lucio Demare and Francisco Canaro who were constantly under contract at Odeon during the 1930s and 1940s, we can clearly hear and measure that the concert pitch on their recordings also remains on A=435 far into the 1940s!

As an interesting fact we can see on the first Lucio Demare Odeon record La racha/Telón the mention «Grabado con piano Bechstein», this mention can also be found on recordings of other Odeon orchestras like the one of Francisco Canaro. We think these were grand pianos with a fuller sound and maybe marked the end of the upright piano era in tango recordings. If Odeon imported Bechstein grand pianos from Berlin in 1938, it might be understandable that they have not wanted to do an invasive retuning just shortly after this expensive acquisition. On Lucio Demare’s recordings we have found that the A=435 concert pitch lasted until the recording of En un rincón/Luna made on 21.12.1943, the first A=440 recording, El barco María dates from 12.1.1944. This is around five and a half years after the arrival of the Bechstein pianos.

The first Pedro Laurenz Odeon recording at 440Hz is Maldonado/Todo dating from 9.12.1943. This finding also concords with Hlynur Helgason’s Odeon Dataset at artinfo.is/tango-history/1-d-shellac-record-tuning-analysis/ which shows that around 1944 there is a clear upwards shift in the average tuning of Odeon tango recordings. As a consequence, we had to put the Pedro Laurenz project on hold and test all major Odeon orchestras in our quite complete collection to see how their concert pitch evolved over the year 1943. We have analysed Miguel Caló, Rodolfo Biagi, Osvaldo Pugliese, Francisco Canaro and Quinteto Pirincho, Lucio Demare, Alfredo De Angelis and the relevant Pedro Laurenz recordings. As an example, the Rodolfo Biagi típica has an average pitch of 435.20 in 1943. De Angelis recorded only three records in 1943 and shows an average pitch of 433.53. The three Osvaldo Pugliese records of 1943 present an average pitch of 436.22. We have noticed that there was a pause in recordings at Odeon during 29.11. and 7.12.1943 after which the orchestras are recorded one after the other in the new A=440Hz concert pitch: Biagi since the recordings on 7.12.1943 Si la llegaran a ver/Lonjazos, Laurenz since 9.12.1943 Maldonado/Todo, Caló 27.12.1943 Elegante papirusa/Marion, Canaro 29.12.1943 El negro Ramon/La culpa tuve yo, Demare 12.1.1944 El barco María and Pugliese 31.3.1944 Recuerdo. All Odeon records prior to December 1943 have an A=435Hz concert pitch!

As opposed to RCA Victor where the retuning of orchestras happened over the course of several years and being finished by the end of 1939, the Odeon label has a clear turning point situated in December 1943 from where all their orchestras appeared to be retuned to A=440Hz.

PHONO PREAMPLIFICATION
RCA Victor and Odeon use similar but not the same preamplification schemes. This became evident as we had to treat each label individually with slightly different bass boosts and roll-offs to restore the RCA Victor and Odeon curves.

DISCOGRAPHY
As a starting point we used the discography contained on the Club de Tango (CdT) CD leaflets which can be consulted in Bernhard Gehberger’s very complete and immensely useful tango research database at tango-dj.at. In our improved discography we added fresh information directly contained on the original records like notes, matrix and take numbers. We also rectified a lot of incorrect record numbers on the 1950s Pathé recordings. The confusion on the CdT discography comes from Pampa reeditions which differently associated the A-B-sides. Only Pathé are original records and Pampa are later reissues. We also corrected the publication date of the last vinyl record. This misunderstanding comes from Horacio Ferrer’s Tango Encyclopedia where he states erroneously that the record was published in 1966. 1966 is the release date of the short film Fuelle querido by Mauricio Berú for which Laurenz composed Esquinero. The LP was published in December 1968, this is confirmed with the Catalogo Discos Long Play of December 1968.

FORMATS
This edition is available in the formats: 24bit-96kHz both ALAC and FLAC, 16bit-44.1kHz CD quality both AIFF and FLAC and as 320kbps CBR MP3.

ACKNOWLEDGEMENTS
Boris Puga, Montevideo
For giving us access to his record collection.
Without his help this publication of Pedro Laurenz wouldn’t have been complete.
Ruben Castaldi, Montevideo
For contributing some very rare shellac records and his continuous and important feedback and support for the project.
Age Akkerman, Amsterdam
For the discussions, crosschecks and help during our in-depth Odeon pitch analysis.
Omar Facelli, Montevideo
For his expertise in 78-rpm records and operating our mini transfer studio in Montevideo. 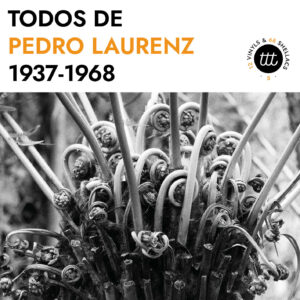