The present restoration project is the continuation of our first collection « Todos de Osvaldo Fresedo 1933-1939, TTT4 » published in 2020. It contains all studio recordings Osvaldo Fresedo made at the record company RCA Victor in the 1940s. Together, our albums TTT4 and TTT7 cover the totality of his 208 recordings from 1933-1948. TTT4 covers tracks 1-98. The current album, TTT7, picks up with number 99 and ends with number 208.

Compared to the 1930s, in the 1940s Fresedo recorded far fewer otros ritmos and film music. Of the 111 recordings of the 1940s, 4 are film music, only 2 are otros ritmos; there are 5 milongas, 7 valses and 97 tangos. 16 titles are his own compositions. It is also interesting to note that the RCA Victor Fresedo recordings came to an end in 1948. Generally, when this happened there is never an official reason given. We know though that Fresedo acquired his own night club « Rendez-Vous » around this time. When looking closer, the main studio activity of the orchestra ends de facto after the last recording with Oscar Serpa on 26.11.1946. What follows then, after nearly a year of pause, is a single record with the guest artist Pedro Vargas which contains on the B side the instrumental tango El choclo. After again a year of studio inactivity, the orchestra comes together at three closely spaced dates, 16.7., 20.7. and 29.9.1948 to record four last records with Osvaldo Cordó and the returning Roberto Ray.

During 1941-1945, Fresedo produced on average eight records per year at RCA Victor. But in 1946 he recorded only four, in 1947 only one and in 1948 four. We have seen a similar decline with the orchestras of Pedro Laurenz and Lucio Demare. Apparently, in the second half of the 1940s access to recording facilities became increasingly difficult for a lot of tango bands. The new record labels, popping up at the beginning of the 1950s, noticed this. They filled the gap by offering more opportunities for the tango orchestras. And indeed, Osvaldo Fresedo changed to Columbia where he started recording on 25.10.1950, around two years after his last RCA Victor record came out. Here he produced a considerable number of records again throughout the whole 1950s. He never went back to RCA Victor and remained subsequently with Columbia, Odeon, Arte and CBS.

Most titles of the present album were never republished. Some can be found on vinyl reissues, especially on the RCA Camden series, but those contain without exception more or less strong added reverberation, have suffered a serious loss of sound details and are out of pitch.

Another interesting observation is the disappearance of the harp which can be dated after the last recording with Ricardo Ruiz, Buscándote, recorded 30.12.1941. This is followed by a five months studio pause of the orchestra. Maybe the harp went with Ricardo Ruiz who founded his own orchestra called « Orquesta Tipica Argentina » with some of Fresedo’s musicians at the beginning of 1942. Alternatively, it is possible that the harp received a new role in the orchestra more situated in the legato parts. The glissando passages since 1941 sound more as being performed on the piano. It is also possible that the harp remained in the orchestra but wasn’t staged anymore in the studio recordings.

On the other hand, the vibraphone and percussions remain present throughout the 1940s. The vibraphone is the special instrument which stays in the forefront marking here and there solo accents or connecting phrases together. We also hear a Hammond organ on some recordings. On the first appearances it is played solo, later it blends more and more discretely into the tutti passages of the violins.

The main singers of the orchestra during the 1940s were (in order of appearance and with number of recordings): Carlos Mayel (8), Ricardo Ruiz (17), Oscar Serpa (59), Osvaldo Cordó (4) and the returning Roberto Ray (4). There are also two guest appearances, first the Uruguayan baritone Carlos Roldán, a perfect match for interpreting the candombe Negra María, and later the famous Mexican opera tenor Pedro Vargas with whom Fresedo recorded three sides, Vida mía, Capullito and La última noche.

All transfers were made in Brussels using records coming from our shellac collection. We then identified some of our records with strong distortion and high background noise and were lucky to get again the valuable contribution of the Uruguayan tango collector and researcher Boris Puga. These contributions were transferred directly in our small studio in Montevideo.

With this album, the full cycle of Fresedo recordings produced during the 1930s and 1940s at the RCA Victor Studios is complete.

PITCH
All recordings of the present collection are in A4=440Hz concert pitch.
A musical note has different characteristics, to name a few: its name, duration, timbre and precise frequency. The frequencies (pitch) of notes in a recording shift when playback speed changes. If the playback speed is faster than the original recording speed, everything sounds higher (and faster). This is called deviation. According to sound archivist Peter Copeland, all transfers from historic sound recordings (it doesn’t really matter if it’s shellacs or vinyl records) have to undergo this deviation analysis and need to be corrected if necessary. This way, we recover as best as possible the recording speed, hence the musical pitch and keys of the original performance.
We have analysed all recordings of the present album individually to determine the exact speed for our transfers that corresponds with the piano tuned to A4=440Hz. The statistics of our in-depth analysis show very little deviation and are closely distributed around our reference playback speed of around 78-rpm. The pitch information is extremely important for us and also for you so you can enjoy these recordings in the intended tonality and tempo.

PHONO PREAMPLIFICATION
An equalizer changes how loud certain frequencies sound. Therefore, it has an impact on the overall tonal balance of a recording, but not on its pitch. A phono preamplication scheme contains equalizer settings for a record, spreading over the whole spectrum forming a curve. This curve is defined by two points, the turn-over (bass boost) and the roll-off (attenuation at 10kHz). As we moved into the 1940s of Osvaldo Fresedo’s repertoire we recognised a light shift of the preamplication scheme at RCA Victor and we found strong similarities to the de-emphasis we used for the album « Todos de Juan D’Arienzo 1940-1949, TTT1 » which makes sense and confirms our settings. During our mastering process there can be some light aesthetic EQ to further improve the tonal balance.

DISCOGRAPHY
Apart from Nicolas Lefcovich’s discography, there isn’t a comprehensive modern discography of the Osvaldo Fresedo orchestra. Most of the available discographies are missing a lot of titles, have incomplete record numbers and other inaccuracies. We therefore decided to create a new discography, based on our physical record collection and we used the existing discographies only as a general guideline. Our discography can be found in the download archive. We made one discography covering 1933-1948, starting with our prior Fresedo edition (1933-1939), TTT4, and followed at position 99 by this album, TTT7.

FORMATS
This edition is available in the formats: 24bit-96kHz both ALAC and FLAC, 16bit-44.1kHz CD quality both AIFF and FLAC and as 320kbps CBR MP3. The files originate all from our high-resolution digital master and therefore should all sound the same. The only difference is bit depth, sampling rate and codec.

ACKNOWLEDGEMENTS
Boris Puga, Montevideo
For giving us access to his record collection.
Age Akkerman, Amsterdam
For his substantial help in developing the tuning
method and especially the pitch analysis session we carried out in 2017 when we made a first test run of the Fresedo transfers.
Ruben Castaldi, Montevideo
For contributing some very rare records from his private shellac collection for TTT4 and assisting the project with his expertise.
Omar Facelli, Montevideo
For his expertise in 78-rpm records and running our mini studio in Montevideo. 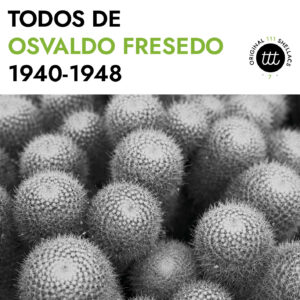 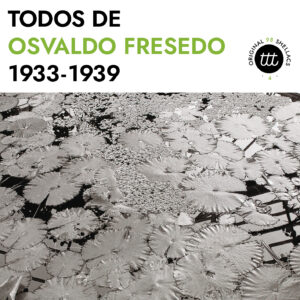