Release Notes for the Album "Todos de Juan D'Arienzo 1940-1949" published on Oct. 2020 by Tango Time Travel. It contains all 230 studio recordings of the orchestra during these years as high resolution downloads!

The present restoration project makes available as very high resolution downloads all 230 recordings of Juan D’Arienzo and his orchestra made at the RCA Victor Studios in Buenos Aires between 1940 and 1949. We wanted exclusively to use the best condition shellac records available, preferably first issues. We needed around four, sometimes up to six records, per title in order to get a satisfying signal quality, discarding a lot of noisy records. This severe selection process made it possible to use records with very low distortion, silent background noise and reduced damages. It also enabled us to not apply any digital denoising which reduces the musical information. Once the milk is in the coffee it’s difficult to get it out again, noise and signal are linked in the same manner. Most of the noise was prevented before the signal entered the digital process. This included using both electro-magnetic and opto-electric playback of the record and trying out which method produced the best sounding result. We used a studio record player and a purely analogue laser record player optimised for archival and restoration work. Furthermore we employed around 20 different mono cartridges, mainly of the moving coil type, always trying to get the best match for each record individually. We aimed at producing the lowest distortion and background noise and at the same time extracting the liveliest signal. 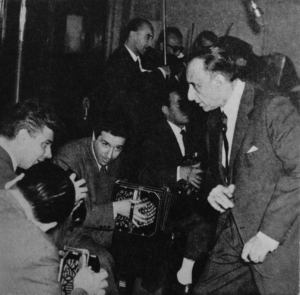 The transfer work was mainly done in Brussels but for some titles it was extremely difficult to find better records and we were very lucky to get the help of the famous D’Arienzo collector Jorge Debroque from Montevideo, president of the «Comisión Juan D’Arienzo» who gave us unrestricted access to his immense collection for this project. For this purpose we set up a small studio in Montevideo and were able to further improve the set by around 20 titles which we had in unsatisfying quality.

The clarity of the current transfers gives access to musical details which were inaudible before and enables one to clearly distinguish the layering of instruments. During our long listening hours, we recognised something very particular with the 1940s D’Arienzo. Even though recorded in mono, the instruments are arranged around the microphones at different and changing perceived distances. It’s like a stereo before the introduction of stereo, without right and left but front and back. This is particularly recognisable for the piano which changes its sweet spot from recording to recording, sounding here and there from afar and on occasions very close. This variable sound stage sometimes is connected to the genre of the recording. On vals and milonga, the double bass is at the forefront, and on some instrumental recordings all the instruments are at equal distances like on the older tango orchestra’s recordings. 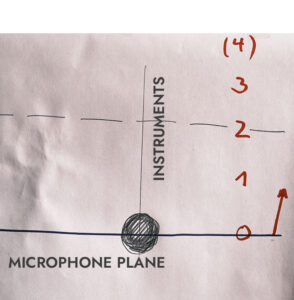 Generally in tango recordings the instruments are all in equal fixed distance to the microphone. Therefore we decided to trace down a subjective positioning classification of the instruments used during these studio sessions (most probably this was achieved by repositioning the microphones). We assigned for each instrument group/dominant solo and singer a position number from «0», stuck on the microphone, to «3», far in the background. Our analysis is available in the download package. It reflects how we perceived this particular soundstage on each recording, even if it’s only a hypothesis.

As you might know, to be able to make an analogue record, the treble band of the recording is increased and the bass part reduced. This is done to keep the grooves at an even width, or better said, average horizontal amplitude. It permits to fit more musical information onto the record and follows a curve which is standardised today and known as the RIAA curve. During playback this process has to be inverted, treble needs to be attenuated and bass boosted. Before the wider spread of the RIAA curve at the end of the 1950s, every record company had their own scheme. To make things even more complicated the schemes of each record company evolved and changed. We selected the most appropriate de-emphasis values on our analogue preamplifier. Since we started to understand the mono spatialisation on these recordings, things became a lot easier for finding the most balanced playback curve. We stopped applying a curve to compensate for the spatialisation and started to apply it with the spatialisation in mind which is so characteristic for these recordings. Here we also discerned that a lot of historic transfers failed because of this misunderstanding. They added even echo/reverb to these recordings which is a nonsense because it exaggerates an already present spatialisation. During our restoration process we tried to avoid overly using the de-emphasis process to reduce noise. Historically this has often been done but leads to dull and bass dominant results. In this regards, we tried to carefully protect the higher and lower regions of the frequency band, the treble and bass, as they make out the naturalness of the sound.

The historic shellac records were recorded at an indicated speed of 78-rpm. On 50Hz electric power systems, like in Argentina, the exact theoretical speed was 77.92-rpm. In practice this speed varied and wasn’t a fixed standard. Add to this different external and intrinsic factors which during recording could slightly change the lathe speed and as a result further shift the musical notes either up or down in the resulting record. To name a few: fluctuation on the power grid, temperature, setup and condition of the cutting recorder. Most of the early record players had a pitch control and let the listener adjust the pitch to compensate for these errors. Looking at the history of D’Arienzo re-editions we observe a lot of crazy pitches which ruin the musical perception. Each new edition seems to be based on an earlier one, adding always extra playback speed hence shifting the musical keys more and more (cf. Mickey Mouse effect). For our transfers based on first editions we calculated the concert pitch of the recordings on piano extracts. We did not globally calculate an average over the whole track as this method is not precise enough and error prone. With a statistical method we then calculated the deviation of each record individually and applied the corrected speed on the record player in the analogue domain. We also took into account the Railsback curve of the piano and corrected affected frequencies when necessary. On some recordings we recognised that the pitch decreased during the original recording (e.g. Dime mi amor). In these cases we had to correct the deviation in a dynamic non-linear manner. We globally fixed A440 as the concert pitch for this edition. Most of the records were very close, under 1% deviation, to this pitch, « 1% deviation » means that it’s an unperceivable difference for most listeners. Higher deviations can be found though on later shellac issues starting with the mid-1950s when tape was introduced and the copies stopped being done in a strict 1:1 pressing process. Pitch correction is an important part of the restoration process and very time consuming. In the end it’s truly rewarding to listen to the music tuned to the proper musical keys.

We used the discography « Tangoteca » of †Johan Vindevogel which we completed with the matrix numbers and some annotations. Beware that our sorting is oriented by the record numbers. Johan states in his discography : « At the end of 1942, Victor changed its record numbering system (from the 3xxxx series to the 60-xxxx series). We now see clearly that this recording [El lazo] was published at least 2 months after its production. The strict rhythm of the early years (2 recorded – 2 published, and so on…) gradually eroded from the end of 1941 on, by mixing recordings of different sessions on a single edition. » Check Johan’s online discography to see the chronological sorting.

Currently this edition is available in the formats: 24bit-96kHz both AIFF and FLAC, 16bit-44.1kHz CD quality both AIFF and FLAC and as 320kbps CBR MP3. We suggest using the 16bit-44.1kHz CD quality for playback and best compatibility with all players. Please be aware that all files are in mono, containing one single track. Most players and sound devices will sum this track to fill all stereo channels. 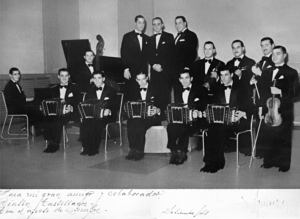 For contributing some very rare records from his very valuable and unique private collection.

For his substiantial help in developping the tuning method and occasional proof listening and all of his positive feedback and suggestions.

For his expertise in 78-rpm records and operating our mini transfer studio in Montevideo. He gave with generosity extraordinary insights to the project. 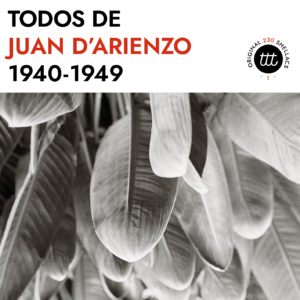 This album contains 230 audio files corresponding to all recordings...
Select options
Rated 5.00 out of 5