The present restoration project makes available as high resolution downloads the complete 84 recordings of «Carlos Di Sarli y su Orquesta» between 1951 and 1954. They have been produced at the then newly established Music-Hall record label in Buenos Aires. This label marks an important milestone in Argentine recorded music production which was until then pressed on 78-rpm shellac records. Music-Hall achieved the first Argentine commercial recording with a reel-to-reel tape recorder and a resulting vinyl record production. They were at least one year ahead of Odeon and RCA Victor, the two until then dominating major labels. To the press, Music-Hall announced Carlos Di Sarli as the first Argentine tango artist ever to be published on the new vinyl format. The records are still in mono but the tape master brings a new flexibility and mobility into the recording process. The studio and the record plant can now be easily at different locations. Another advantage of the new medium is the much lower background noise and therefore slightly higher dynamic range: Music-Hall advertised the sound of their records on the sleeves as fidelidad que iguala a la realidad, fidelity that equals reality. Nowadays we would maybe use the term high fidelity.

The recordings were made on tape in the studios of Argentina Sono Film in Buenos Aires in a magnificent recording room (see the photo on the last page). Then they were sent to a vinyl plant in Peru where the records were pressed and sent back to Argentina for domestic distribution. Around the end of the summer of 1953, Music-Hall changed to a new recording location which is indicated on the record labels: “Grabado en los estudios de Radio Splendid“. It can be verified on LP-1026, LP-1042 and LP-1050. This strongly suggests that they stopped using the Sono Film studios for the last records and also that the vinyl plant might have been by then relocated to Argentina because the «Made in Peru» is replaced by the mention «Industria Argentina». We have marked the change both in the comment fields of the metadata tags and in the attached discography. Di Sarli had two singers during this period: Mario Pomar and Oscar Serpa. When Di Sarli went back to RCA Victor in June 1954, he kept these singers and the musicians. This could indicate that the end of his collaboration with Music-Hall was purely a matter between him and the label. The 84 recordings of this period consist of 77 tangos (of which 47 instrumental), five valses and two milongas. Carlos Di Sarli himself composed four titles specifically for the Music-Hall project with the voices of his two singers in mind: For the singer Oscar Serpa the vals Poema triste and the tangos Cuatro vidas and Por qué le llaman amor. For the voice of Mario Pomar he composed Tangeando te quiero. Eight more songs got composed during the Music-Hall period and seem also to be premiered by Di Sarli: Fulgor composed by José Dames with lyrics by José María Contursi, Domani by Carlos Viván-Cátulo Castillo, Siempre más by Emilio Brameri-Juan Andrés Buron, Buenos Aires yo te canto by Ángel Di Rosa and Chimentos by Emilio Brameri-Emilio Casals.

On these records we can for the first time clearly hear the air floating in the bellows and the buttons of the bandoneons being played. We have preserved all these sounds as they are part of the recorded performance. The tape process and the vinyls provide for a very good instrument separation and it became easier than ever to distinguish the bass of the piano from the double bass. A very challenging aspect for the reproduction of the music is the extrem gap between very high and low notes. The music of Carlos Di Sarli is known for very few solos. Compared to other orchestras, in these recordings we can hear that the instrumental accompany is mixed really loud into the vocals of singers as if the instruments wanted to blend together with the voice.

PITCH
Regarding the tuning of the instruments, we have seen from former projects that starting with the 1950s, the afinación brillante at 442Hz becomes prevalent. However, our pitch analysis has returned an average result situated closely around 440Hz. Interestingly, Elvino Vardaro’s nephew Osvaldo confirmed in an interview conducted by Michael Lavocah that the orchestra retuned to 442 when Elvino joined in 1956 and when Di Sarli had already returned to RCA Victor. As a consequence, our Music-Hall transfers have a concert pitch with the piano tuned to A4=440Hz which is the most plausible and natural sounding concert tuning for these recordings. The pitch information is extremely important because it allows us to recover the original recording speed so you can enjoy these recordings in the intended tonality and tempo.

PHONO TECHNIQUE
For the production of this album, we used the same monophonic cartridge throughout the album to get a homogeneous sound. As these 7’’ records are from the beginning era of the vinyl record, we made sure to use a diamond of 1mil diameter instead of the more common 0.7mil in order to better track the slightly larger grooves and reduce distortion. When listening through the different generations of reissues, 10’’ records, several 12’’ record collections, compact cassettes, etc, we recognised at every stage the master tape degradation progressing: like print-through artefacts, tape being stuck to the head, increased wow and flutter, spliced tape with missing passages like on later reissues of Como los nardos en flor and added reverb. You can really hear how the masters deteriorate, rendering these reissues mostly unusable for the project. We obtained the best sound with well-preserved 7’’ records but we needed several copies as they often suffered from high-frequency distortion and loud background noise when they were too often played and misused in the past.

DISCOGRAPHY
We started working on our first Carlos Di Sarli Music-Hall discography six years ago, in 2016. In the last weeks we were able to further improve the discography with new information as we finally received two very rare missing records, LP-1050 and LP-1079. We used the recording dates provided by the Japanese label CTA on their CD collection because the original recording ledgers are missing. For the first 36 recordings the recording dates provided by CTA seem to be plausible. Starting with the 10th MH-album there is a drift between the legal publication date at the Boletín Oficial and the CTA recording dates. How can a record be legally deposited before it is recorded? Therefore at least the recording dates starting with Mi refugio until the last recording should be viewed critically.

FORMATS
This edition is available in the formats: 24bit-96kHz FLAC, 16bit-44.1kHz CD quality both AIFF and FLAC and as 320kbps CBR MP3.

ACKNOWLEDGEMENTS
Age Akkerman, Amsterdam
For the discussions, crosschecks and help during our in-depth pitch analysis and corrections.
Omar Facelli, Montevideo
For his expertise in 78-rpm records and operating our mini transfer studio in Montevideo. 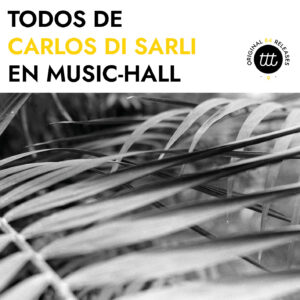